From Wikipedia, the free encyclopedia

ExpressCard is a hardware standard replacing PC cards (also known as PCMCIA cards), both developed by the Personal Computer Memory Card International Association (PCMCIA). The host device supports both PCI Express and USB 2.0 connectivity through the ExpressCard slot, and each card uses whichever the designer feels most appropriate to the task. The cards are hot-pluggable. This is an open standard by ITU-T definition which can be obtained from the ExpressCard website. However, a US$2,500 fee[1] is required to access the documentation for non-PCMCIA members. 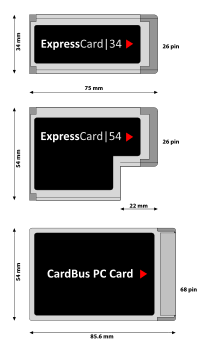 Number of devices: 1 per slot

These slots can accept Firewire 800 (1394B), Serial ATA external disk drives, Solid-state drives, Wireless network interface cards, TV tuner cards, soundcards, additional memory and memory card readers, among other things. Asus has recently revealed an external graphics card that can be connected to laptops through the interface, the XG Station.

ExpressCard supports two form factors, ExpressCard/34 (34 mm wide) and ExpressCard/54 (54 mm wide, in an L-shape) — the connector is the same on both (width 34 mm). Standard cards are 75 mm long (10.6 mm shorter than CardBus) and 5 mm thick, but may be thicker on sections that extend outside the standard form — for antennas, sockets, etc. The 34 mm form factor cards fit into both 34 mm and 54 mm card slots via a diagonal guide in the rear of the 54 mm slot that guides the card to the connector. The 54 mm card will fit in only a 54 mm slot.

Adapters are available for connecting an ExpressCard/34 card to a CardBus slot.

The major benefit of ExpressCard technology over the previous PCMCIA CardBus PC card is a dramatic increase in bandwidth, afforded by the fact that the ExpressCard has a direct connection to the system bus over a PCI Express x1 lane and USB 2.0, whereas CardBus utilizes an interface controller that only interfaces with PCI. The ExpressCard has a maximum throughput of 2.5 Gbit/s through PCI Express and 480 Mbit/s through USB 2.0 dedicated for each slot, versus CardBus’s shared 1.06 Gbit/s bandwidth.

In addition, the ExpressCard standard uses lower voltages than the previous CardBus slots (1.5V and 3.3V versus 3.3V and 5.0V).

The ExpressCard FAQ also claims other advantages, including lower cost, better scalability, and better integration with motherboard chipset technology. The ExpressCard interface is not backwards-compatible with CardBus devices, which presents a problem for those who may purchase a new system only to find that their devices do not work with the new slot design.

ExpressCard has become quite prominent on most new or high-end laptops made since 2006.

Because of the lack of backward compatibility, some laptop manufacturers have chosen to release models incorporating both CardBus (PCMCIA, PC Card) and ExpressCard slots. These include certain models of Acer Aspire, Toshiba Satellite, Dell Latitude and Precision, MSI S42x and Lenovo ThinkPad Z60m and T60.

A large number of ExpressCard devices were presented at the CeBit trade show in Germany in March 2005. [5] In November 2006, Belkin announced that it is launching the first ExpressCard docking station, which uses the PCIe part of an ExpressCard connection to enable 1600×1200 video and the USB part to provide USB, audio and network ports. [6] [7] This points to the ability for ExpressCard to allow more capable non-OEM docking stations for laptop computers.

Recently Sony has introduced its Vaio TZ model, which incorporates ExpressCards. Also the Sony VAIO FZ series has the ExpressCard 34 Slot integrated in them. Sony also uses the ExpressCard/34 form factor for the flash memory modules in its XDCAM EX/SxS based camcorders, making the copying of video data between these cameras and ExpressCard-equipped laptops trivial. For this reason, Sony also offers a USB-based SxS reader for desktop computers.

The new Toshiba Satellite P and X 200/205 series of laptops and desktop replacements have an ExpressCard/34 slot since April 2007.